Palimpsest: the catalyst for this post began with the title of this journal and my curiosity to discover what a word concerned with literature might reveal about art.

Historically, the term palimpsest referred to the method of recycling writing surfaces by effacing the old text to make room for the new; a technique frequently used when parchment was in short supply. This method of erasing works was not entirely effective because the old lettering could often be distinguished from the later writing. Though, in its extended use, palimpsest may refer to ‘something reused or altered but still bearing visible traces of its earlier form’.[1]
Whilst the term originally applied to textual studies, in keeping with the art elements of this journal, I considered what it might mean to create palimpsest in art. That is, the layering of art over text or another artwork. Nowadays, where there is no shortage of surfaces for mark-making, the need to recycle surfaces, then, moves from necessity to an aesthetic statement. Contemporary palimpsest surfaces are experimental ones that contemplate the dichotomy of destruction and preservation. In obscuring one artwork with another, the immediate effect is the destruction of the “original image”. However, returning to the introductory definitions, palimpsest only partially erases the proceeding words/images because the pressures of time weaken these layers and they re-emerge, transforming the superimposed words/images.
Thomas De Quincey captures the pressures of time in his 1845 essay titled ‘The Palimpsest’, in which he refers to this structure as an ‘involuted’ phenomenon, whereby foreign texts interweave, competing with, and seeping into each other. De Quincey’s observed effects of the textual palimpsest are also applicable to art. Here is where the dichotomy of the palimpsest surface is revealed; a method that was intended to destroy pre-existing work, ironically, preserves it, albeit it in an altered state.

One such contemporary piece that engages with these thoughts is Mark Bradford’s White Painting. In this mixed media piece, Bradford exclusively layers paper from his daily life such as ‘remnants of found posters and billboards and hairdresser’s permanent endpapers’, which he then scratches and sands down to reveal the levels of colour and image. [2]  Bradford usurps the traditional method and thrusts it firmly into the contemporary by consciously, manually and with speed, reproducing the concealing and revealing of layers. 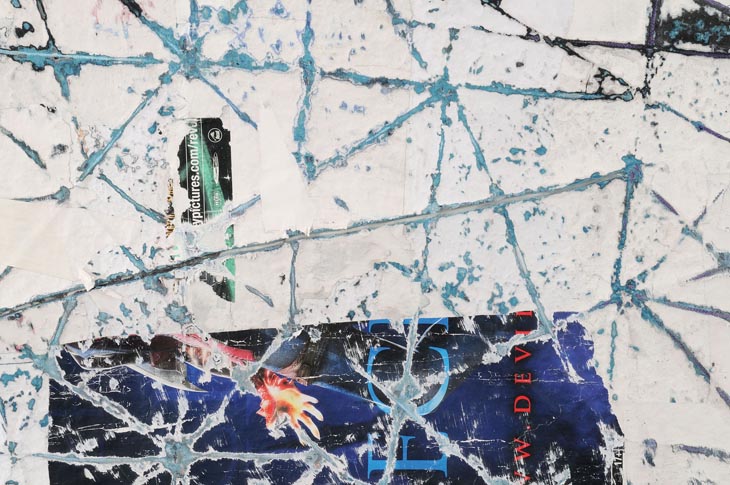 Only once Bradford has sanded the outermost layer do we see the fragments of words printed on the posters below. What White Painting articulates is the importance of palimpsest surfaces, whether that be in text or art. It invites us to consider our notions of linearity and fixity; to consider that the outermost image we perceive might be an accumulation of layers whose origins are scattered. Over the fullness of time, the bleeding of layers makes it difficult to distinguish the constituent parts.

Where some might be inclined to view this infiltration of one layer into the next as a contamination of the artworks, or a dilution of the “original” image, I see palimpsest surfaces as archival ones that preserve fragments of multiple works. Destruction becomes a perverse mode of preservation as these palimpsest artworks accommodate different histories and times, and the present moment becomes inscribed with images of the past.