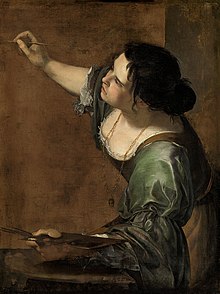 Artemisia Gentileschi, Self-Portrait as the Allegory of Painting, 1638–39

In an investigation of some of the most prominent female painters, spanning from the renaissance period to 20th century modernism, one cannot help but notice that without fail the term “overshadowed” seems to crop up within every description or piece of criticism. Exhibitions are no safe haven from this tendency to measure the value and meaning of a woman’s work in comparison to the masculine ideal, most often by comparing her, or her success, to that of her husband. Jo Hopper and Elaine de Kooning, both established as artists in their own right, after marriage sank publicly into the role of the artists muse – the object – when once they had been the creative subject; even in Hoppers case being the inspiration for her husband’s own work in terms of motif and colour. Perhaps Frida Kahlo, an Icon of female creativity, famously her own muse for an Oeuvre of 55 self portraits with a staggering combined worth. Yet the reception of an infamous mural by her husband Diego Rivera in Detroit news contained the sentence “wife of the master mural painter gleefully dabbles in works of art.” Almost nowhere can female painters escape the title of “so and so’s” wife – even Kahlo dabbles like a child at play as opposed to her husband, the professional, the master, the artist.

Their marriage was tempestuous, and the critical response to her paintings is filled with wild assumptions surrounding his influence upon her creativity. Artemisia Gentileschi, a baroque master of Caravaggio’s generation who is largely remembered for the prosecution of her rapist Agostino Tassi as opposed to her representations of the empowered and embattled female figure – the critics eye has seen the trauma of her rape in every brushstroke, every depiction of feminine strength can be traced to the torture by thumbscrews she endured at her trial. It is the responsibility of curators to let the work, occasionally, speak for itself (Gentileschi herself will be celebrated in the National Gallery in 2020). It was the curators of the Louvre, in 1893, that discovered the fabricated signature of Frans Hals on the work of Judith Leyster, and uncovered the truth behind the fraudulent assertion that the hands of a woman could never have been the source of the six Dutch golden age paintings that she lost her claim to after death. She continued to be dismissed after the discovery as a follower of Hals and her husband’s own painting.  The  power to speak with authority over artwork lies, in my opinion, solely in the hands of the artist, these cases are fraught with the idea that women simply don’t understand their own work as well as men do – the famous case of Georgia O’keefe and her refusal to have her flower paintings reduced to only a symbol of female sexuality springs to mind. Perhaps art criticism can re-imagine this legacy of female painters back into the subject – their work does not have to be overshadowed if we assert our trust in the woman as the artist, the creator, who knows what she knows, and paints what she knows.